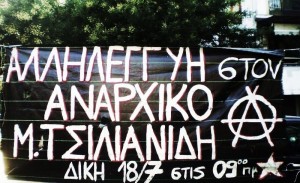 Banner in Thessaloniki: SOLIDARITY WITH ANARCHIST B.TSILIANIDIS – Trial 18/7 at 9am

In the past three years, several anarchists are held in Greek prisons and even more are under a judicial hostage, as a consequence of the escalating anarchist revolutionary violence that stepped up during this period.

Faced with an unusually large number of cases, which were also time-consuming as far as legal termination was concerned, the domination sought ways to circumvent the procedural and legalistic limitations that were after all turning against it.

After the legal dead end in which the State found itself in some recent cases due to expiry of eighteen months which, in Greece, is the maximum pretrial detention period (with the case of the three comrades-members of Revolutionary Struggle being the most characteristic), the judiciary sought and still seeks maneuvers to circumvent similar legal complications.

Of course, all kinds of maneuvers lie in the nature of democratic repression, rather than consisting a deviance of some sort, because the dead language of laws always fails to cover the confrontational disposition and insurrectionary acts of those who do not capitulate to the resignation.

The use of DNA sample as incriminating evidence holds a special place among the new repressive trickeries which are being tested by the State. Science has been established in the common conscience as a new religion and body of absolute truth, and thereby the DNA is one of the most ideal weapon in the hands of the State since it lends an elusive impartiality and superficial scientific objectivity to the prosecutions against those who are considered a priori ‘guilty’.

We oppose the legal dipole of ‘innocence and guilt’ that fortifies the judicial authority’s role by only speaking the language of the judiciary, and reproducing the fake distinctions of democracy. Either defendants accept acts attributed to them, or not, every trial is part of a frame-up case; a premeditated construction with the primary aim of depoliticization, in an attempt to cut out acts from their incentives and political causes in general, and to eventually disarm them, in order to be brought before the legal system. A frame-up is not a case-by-case derogation but the essence of every judicial proceeding, and its political stakes impose such a machination. Distantiating ourselves from any legalistic details regarding the existence or non-existence of evidence, to us, all comrades who are being accused can always be found guilty of their political existence, their subversive action, the untamed of their conscience.

On July 18th, anarchist Babis Tsilianidis is called to attend Thessaloniki courts, accused of an armed robbery which took place at the accounting department of the AHEPA hospital in July 2010. Sole evidence of his involvement in this particular robbery is a handkerchief found near the place where, according to the police’s allegations, Babis’ genetic material was also found among other genetic materials.

The repressive mechanisms orchestrate once again a prosecution–firework that is aiming at the entrapment of insubordinate fighters like Babis in a maze of indictments, trial briefs and pretrial detentions, while also being a pilot implementation of new suppressive methods.

We stand beside him, in this new machination of the State against him, and send him comradely greetings of solidarity.