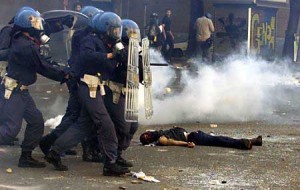 The justice of the law courts has confirmed the sentence of ‘devastation and plunder’ for the comrades on trial for the events of Genoa 2001.

Days of struggle and resistance against all those who devastate and plunder the planet and its human communities have been reduced to an article of the fascist penal code, making 10 comrades pay for the passion, the  anger and the hopes of thousands of demonstrators.

Furthermore, this sentence sets a dangerous precedent, it is a foretaste of the new judicial strategies against streetfighting.

Whilst awaiting communiqués and reflections, here are some reports of the media of the regime:

After 3 hours’ debate, the court of Cassation postponed the sentence pronounced by the court of appeal of Genoaon 9th October 2010 concerning Carlo Arculeo (8 years), Carlo Cuccomarino (8 years), Antonio Valguarnera (8 years), Luca Finotti (10 years and 9 months) and Dario Ursino (7 years). For these five defendants the Genovese judges will re-open the case exclusively concerning the fact that they had not been granted extenuating circumstances at the appeal trial.

The court of Cassation also reduced the sentence inflicted on Luca Finotti, Marina Cugnaschi (12 years and 3 months), Vincenzo Vecchi (13 years and 3 months) and Francesco Puglisi (15 years) by dropping the charge for possession of incendiary bottles, which it considered was included in the overall charges. Puglisi’s sentence was therefore  reduced by 1 year, Finotti, Cugnaschi and Vecchi’s by 9 months each. Conversely, Alberto Funaro’s sentence to 10 years’ imprisonment and that of Ines Morasca to 6 years and 6 months were confirmed as their appeals were rejected.

Although it reduced the sentences, the court of Cassation has decided for the immediate enforcement of the same. Alberto Funaro, Ines Morasca, Marina Cugnaschi, Vincenzo Vecchi and Francesco Puglisi will go to prison.

On the contrary Carlo Arculeo, Carlo Cuccomarino, Luca Finotti (whose sentence was reduced by 9 months), Dario Ursino and Antonio Valguarnera, for whom the judges decided for a new appeal trial concerning the failure to grant extenuating circumstances, are still free.

Italy, Genoa 2001 – The court of Cassation confirms the charge of ‘devastation and plunder’.