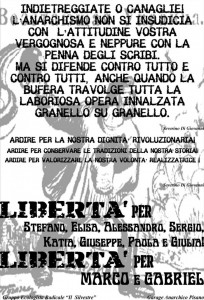 Just like the inquisitions once, yet this time the victims are not women suspected of witchcraft but anarchists accused of terrorism, word that is very much in vogue for nearly 12 years.

This time, however, the news we receive upset us somewhat more than usual as it also affect us of punk4free.org.

This morning (13/6), at around 4am, the ROS carabiniers raided in over forty Italian households, from north to south, carrying out the so-called ‘ardire’ crackdown against the anarchist movement.

The operation resulted in about a dozen arrest orders, including one in Germany and another in Switzerland, and in as many as 24 investigated people.

Immediately, like vultures, all the newspapers and nationwide television newscasts have spread the word, releasing (in a cowardly way) names of ‘extremely dangerous’ Informal Anarchists, including one editor of Informa-Azione and two of Culmine, among whom is our very own Sghigno.

We express total solidarity to all the comrades affected by the raids, investigations and arrests!

Free Sghigno! Free them all!

This text was shared out during a spontaneous protest march in Catania on June 13th:

More than 40 house searches, 24 investigation warnings and 10 arrest orders are the interim budget of a repressive operation orchestrated by the public prosecutor of Perugia Manuela Comodi and executed by the ROS carabiniers on June 13th.

Our friends, acquaintances and/or comrades are accused of subversive association with the intent of terrorism. In these hours, newspapers, TV channels and radio stations continue to bombard with news that are sibylline as much as they are alarming, attributing the responsibility of some explosive parcels and various direct actions on them. In this moment of crisis, the State appears to be very preoccupied, but its attentions are not drawn by the high cost of living, the unemployment, the abrupt diminution of purchasing power, the critical situation of social services, the new poor and the disadvantaged. Its fear is rather growing on whether someone might unmask the role and connections that the State and the system of Capital bear in human misery, which is rampant in the existing way of life.

We do not care if the ten arrestees are guilty or not, what we want to make evident is that locked up, deprived of their freedom and their dearest loved ones are ten people who have dedicated effort and all their energy in struggle, without ever sparing anything and without asking anything in return. Their struggles, those against the concentration camps for immigrants and against racism, against the unchallenged dominion of banks that are ruling the economy, those against the arrogant multinationals and their damaging system of production, those against the State and other authorities that are ruling our lives, are also struggles of our own.

Our solidarity goes not only to the arrestees and investigated people but also to all relatives, friends and housemates whom the law enforcement units did not hesitate to inconvenience by harassing, frisking and badgering with the aim of terrorizing and isolating them, in pure mafia-style.

The customary judicial fabrications will not quench the social conflict; detention will not halt the struggle for a world free of hierarchy and exploitation.

Photos of the mess that the ‘dirty operations division’ ROS left behind after yet another house search on June 13th, this time in Florence.

On June 13th, at 5am, the Digos (Italian political police) raided activists’ places in Reggio Emilia. In related announcements, the Collettivo AutOrganizzato R60 clarifies that the specific police searches have nothing to do with the so-called operation ‘ardire/against international anarchist terrorism’, despite the fact that they took place on the same day.

First the cops searched the residences of two activists, who are affiliated with the R60 space, and seized personal items of theirs. Then the operation extended to the social space itself. Computers, cameras, memory cards, etc. were confiscated. Both detainees were released by midday. R60 members mention, among others, that the police in Reggio Emilia have been persecuting political activists, and in particular those who engage in struggles against environmental devastation and support self-organization and direct solidarity with earthquake sufferers.

As a first response to the incidents of 13/6 in their city and as a token of solidarity with all arrestees of the ‘operation boldness’, the NO TAV arrestees, the struggle in Susa Valley and other prosecuted comrades, on June 15th the collective held an evening anti-repression rally in Piazza del Monte (Reggio Emilia), and later people gathered in the R60 space to collect materials for earthquake sufferers.

In Emilia Romagna, the party CARC (Committees to Support Resistance-for Communism; nothing to do with anarchism) has also expressed solidarity with the R60 collective, with the NO TAV movement, as well as all comrades arrested and investigated under the ‘operation boldness’.

Back off, you scoundrels!
Anarchism is not sullied by your aptitude for disgracefulness and neither by the pen of the scribes. It is defended against everything and everyone instead, even when the storm sweeps away all the hard work put into it grain by grain.
—Severino Di Giovanni

Given below (last updated: June 15th) are all know prison addresses so you can send letters or telegrams to the eight comrades arrested within the ‘operation boldness’, including imprisoned anarchists Marco and Gabriel, who have also been ‘implicated’ in the case. read also ‘The Triumph of the Destroyer Genius’ by one of the two comrades of Edizioni Cerbero (contact mail: VerticeAbisso@distruzione.org)

more info as it comes / follow the tag of feartosleep