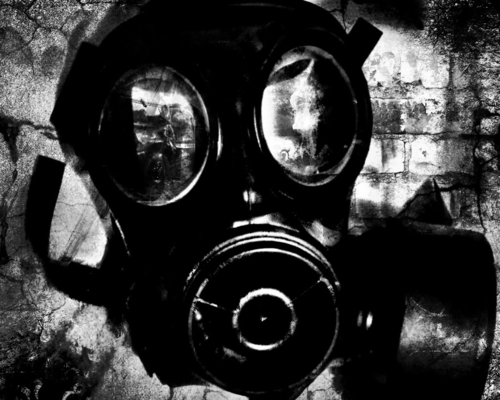 After rejecting an appeal by the prosecutor earlier in the week, a Paris sentencing court has granted Jean-Marc Rouillan a conditional release, which began on the morning of Friday, May 18. Rouillan had spent the past year under a partial release regimen, out of prison but unable to leave Marseille, where he has been working for the Agone publishing house. His freedom of movement was limited by an electronic bracelet. Now, after spending over 24 years in prison, he will still have to submit to numerous methods of control during the next six years. For example, he will not be able to leave the Bouches-du-Rhône area and will have to surrender a portion of his monthly salary to the families of Georges Besse and René Audran, whose deaths he was sentenced for. 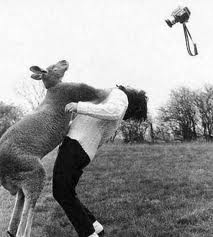 Two Chicago men are in custody Sunday evening, charged in separate bomb-making schemes. investigators have been digging into their backgrounds. Prosecutors said the two men charged Sunday are involved in separate cases, not connected to each other, and not connected to the three men charged Saturday with building Molotov cocktails. They also said both men talked big about creating chaos, but in the end never actually built a bomb.

discovered one of the men was involved in a local chapter of an anarchist group, and has a past defending anarchists, communists and Black Bloc tactics.

END_OF_DOCUMENT_TOKEN_TO_BE_REPLACED 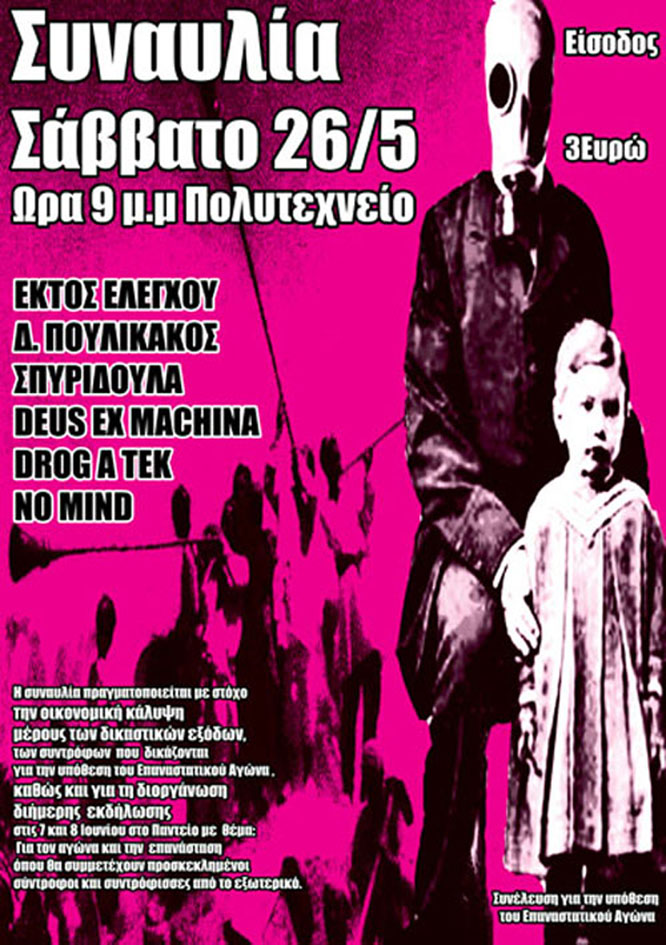 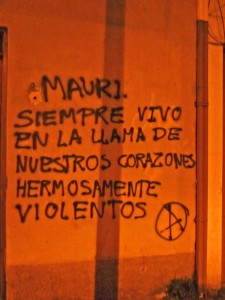 Rough translation/edit based on Negasi (New website on Noblogs!):
The two combatants in Yogyakarta, Billy Augustan and Reyhard Rumbayan (Eat) finally returned to stand trial for the 8th session. The trial was held on Tuesday, May 15, 2012. Billy & Eat sentenced for 1 year 8 months. Both comrades had been in prison since October 7, 2011, shortly after their successful attack against an ATM bank. In the hearing held in the District Court of Lahore, the verdict against the two combatant’s revolutionary actions was read by the Chief Justice, Mulyanto. Both are considered guilty of causing fire and explosion in accordance with Article 187, paragraph 1 of the Criminal Code junto 55. The trial of the Long Live Luciano Tortuga Cell / International Revolutionary Front (IRF) – Informal Anarchist Federation (FAI) will be continued again to hear a response from the revolutionary comrades, Billy and Eat. Confirmation of this date has not confirmed.
Energy to the fighters!

END_OF_DOCUMENT_TOKEN_TO_BE_REPLACED

Dark Nights is an anarchist & anti-prison PDF freesheet to download and print out on the fly. 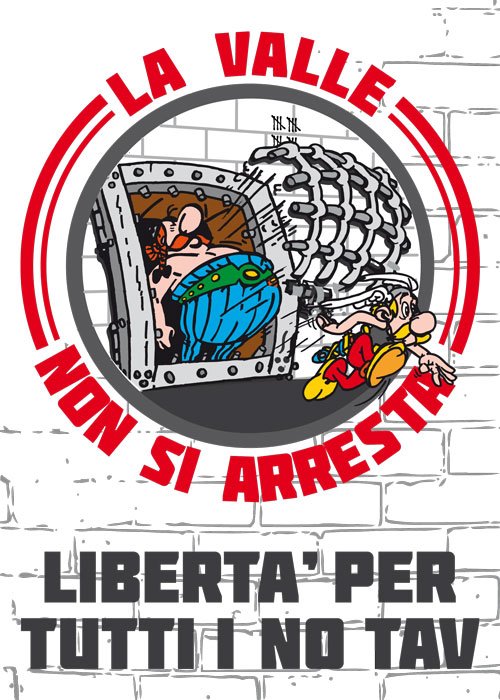 You are here tonight to enjoy a gig, which is going to be great. But it’s not just a gig!
The reason why five bands are playing tonight is to express solidarity with a struggle going on in Italy for more than twenty years, the struggle in the Susa valley (northern Italy) known as NO TAV.
What is TAV?
TAV is the high speed railway, a project that means destruction of the ecosystem, transformation of natural landscapes into horrible travelling routes for businessmen and rich people, and expropriation of land.
Various Italian governments have been trying to implement this project for years, putting at risk one of the most beautiful mountain areas of the country.
The plan for the construction of a high speed railway track linking Turin (in Italy) to Lyon (in France) will irreversibly destroy the valley causing not only environmental disaster but also the disappearance of villages and traditional ways of life. And for what? For the creation of a colossal work that will only benefit the profits of the many companies involved in the project, as the new high speed railway line can only serve the interests of the very rich. Nobody else would ever use these useless and expansive trains.
The people of the Susa valley have been opposing this project of death since the early 1990s: construction yards have been occupied on a great number of occasions in spite of the brutal police repression unleashed by the governments in charge with violent clashes and mass arrests. Actions of sabotage have also been numerous and constant throughout all these years, and at times they have caused huge disruptions on the ‘normality’ of the capitalist system of production.

Following a day of resistance against the occupation troops of the government in the Susa Valley that took place in July last year, on January 2012 dozens of people were arrested, seven of whom are still being held. This gig is for them: practical support is very much needed and can bring some relief to the imprisoned comrades. But what all of us ought to do everywhere is to attack the structures of power, each in his or her way.

The struggle in the Susa valley hits at the core of the interests of the powerful because it is a mass struggle, a struggle from below, a struggle that expresses itself with attacks, practices of self-management and total disregard for political parties and institutions.

FROM ITALY TO THE UK, LET’S STOP THE DESTRUCTIVE PROJECTS OF POWER!!

Addresses of the imprisoned comrades:

source: press of the regime, 21.05.12
An explosive device (paper bomb) blew up at around 3am on Monday 21/5 inside a skip near a polling station in Rapallo (Genoa). The device exploded right in the piazza of Rapallo. The rumble of the explosion was so loud that several people residents in the area went out to the street. All police forces and the fire brigade went to the scene in order to extinguish another three skips set ablaze. According to the investigators the action is criminally motivated and is linked to the arson of two municipal police cars that took place in a nearby area. Carabinieri confirmed that the two cars of the local police were put on fire outside the police headquarters, whereas two of the four skips that went up in flames were placed near the school where the polling station had been set. There were no wounded. 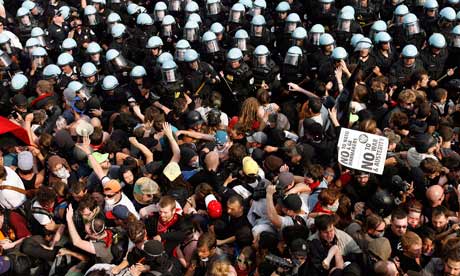 In the context of the 2012 NATO Chicago summit, on 20th and 21st May of 2012, many counter-protesters were detained during anti-NATO protest marches. Several anarchists were arrested ‘preemptively’. They were accused of scheduling and preparing militant actions against the summit meeting of the world’s largest warmonger. There are yet no reliable information from friends and comrades who were actually there, but due to the need of dissemination of some facts about the arrests, here follows a first summary by ABC Berlin.

END_OF_DOCUMENT_TOKEN_TO_BE_REPLACED 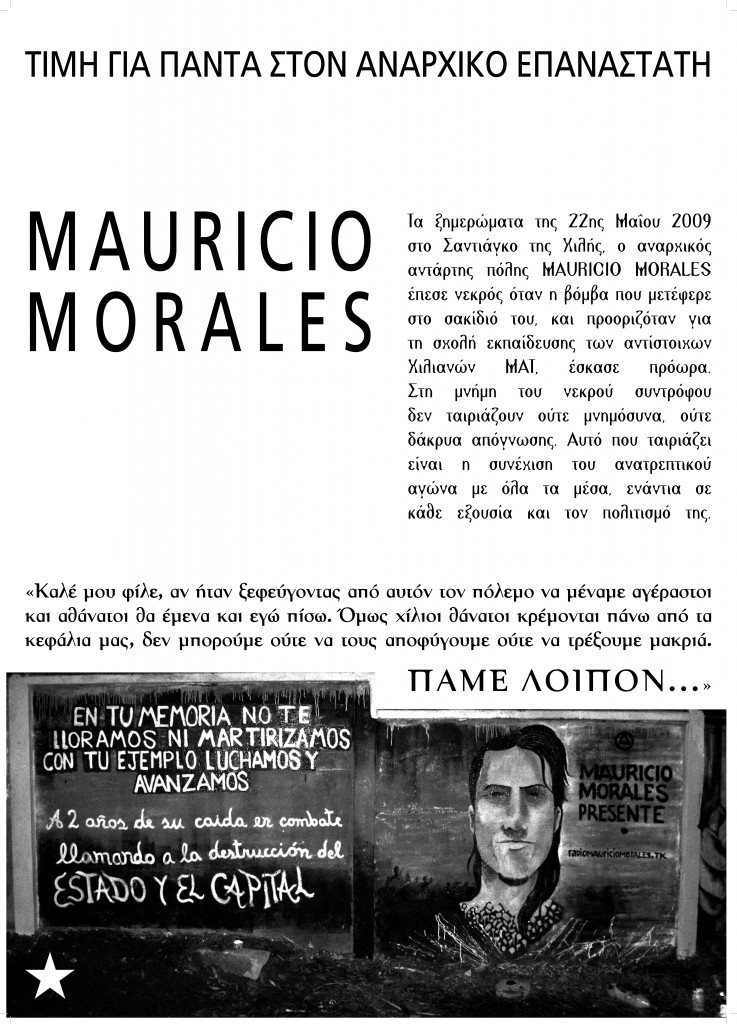 In the early hours of the 22nd of May 2009 in Santiago Chile, anarchist urban guerrilla MAURICIO MORALES died when the bomb he was carrying in his backpack, meant for the training school of the Chilean riot cops, blew up early.

In memory of the dead comrade neither memorial or tears of distress are appropriate. What is appropriate is the continuation of the subversive struggle with all means, against all authority and its civilization.

“My good friend, if getting away from this war meant that we would remain ageless and immortal I would also stay behind. But a thousand deaths are hanging over our heads; we cannot avoid them or run away.

SO LET’S GO THEN”

Translated with respect and love by  Act for freedom now!/boubourAs 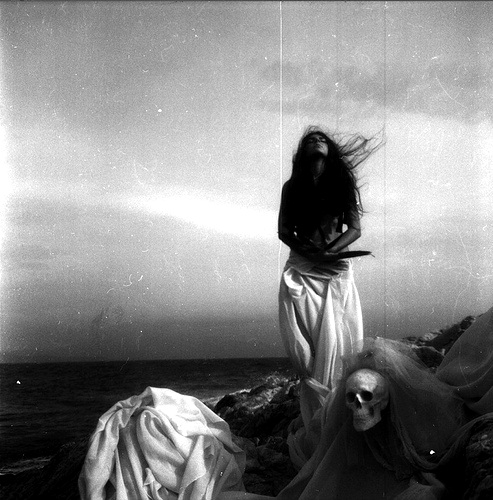 The session began with the following statement read by comrade Christos Tsakalos:

A few days ago, some exceptional news transformed the slow death of prison into a sign of life.

In Italy, our brothers and sisters from the Olga Cell of the Informal Anarchist Federation/International Revolutionary Front rewarded Roberto Adinolfi—head of nuclear energy company Ansaldo Nucleare—with three bullets in his legs. An enemy fell to the ground and a marvelous beacon of war dawned.

At this very moment, black-clad messengers of destruction are continuing to carry the flame of anarchy in the most faraway places.

They are our brothers and sisters from the Bolivian Informal Anarchist Federation, who tirelessly attack the frozen immobility of social death. This time, they placed an explosive device at a business that imports Renault cars from France.

We have some ugly news for this world’s law-abiding citizens.