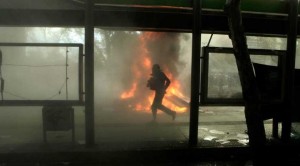 The session was to feature the apologias of the four Fire Cells Conspiracy comrades.

However, before the proceedings even began, Michalis Nikolopoulos read a statement in which he made it clear that the Conspiracy doesn’t defend itself, apologize, or back down, and that the anarchist war continues. In another statement, Christos Tsakalos said that the judges were being ridiculous if they expected the comrades to justify themselves, and he emphasized that they were all proud to be members of the Fire Cells Conspiracy and part of the Informal Anarchist Federation/International Revolutionary Front.

Concluding, Tsakalos addressed the judges directly: “And just so you don’t forget us, you can stick the ‘extenuating circumstances’ of your democracy and your justice up your asses.” Then, while insulting the judges, all four comrades got up and left, completely surrounded by an ample escort of pigs who were bewildered by our comrades’ attitude and afraid that perhaps they were going to attack the judges. Meanwhile, the few comrades present in the courtroom audience shouted: “The passion for freedom is stronger than all prison cells!” A recess was called, but when the session resumed the defendants didn’t return, deciding against attending and making their “apologias.”

The trial was obligatorily adjourned to July 20, which session is scheduled to begin with the prosecutor’s closing arguments. While our four comrades, accompanied by a special escort of pigs, were being led back to prison, they ran into the presiding judge in a hallway. Damiano Bolano shouted at him: “Your days are numbered, judge!” This caused the judge to return to the courtroom to take refuge, leaving smiles on the faces of our comrades.

This Is Our Job

During this session of the court martial against the Fire Cells Conspiracy anarchist organization, the prosecutor requested that the group’s “The Sun Still Rises” pamphlet be read, as well as the communiqué for the explosion at the Thessaloniki Courthouse. Both texts were read by the presiding judge, and the trial was then adjourned to July 10.