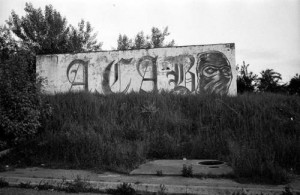 In my travels over the past several months, I have talked with many anarchists who conceive of anarchy as a moral principle. Some go so far as to speak of anarchy as though it were a deity to whom they had given themselves–reinforcing my feeling that those who really want to experience anarchy may need to divorce themselves from anarchism.

The most frequent of the moral conceptions of anarchy I heard defined anarchy as a principled refusal to use force to impose one’s will on others. This conception has implications which I cannot accept. It implies that domination is mainly a matter of personal moral decisions rather than of social roles and relationships, that all of us are equally in a position to exercise domination and that we need to exercise self-discipline to prevent ourselves from doing so. If domination is a matter of social roles and social relationships, this moral principle is utterly absurd, being nothing more than a way of separating the politically correct (the elect) from the politically incorrect (the damned). This definition of anarchy places anarchic rebels in a position of even greater weakness in an already lopsided struggle against authority. All forms of violence against people or property, general strikes, theft and even such tame activities as civil disobedience constitute a use of force to impose one’s will. To refuse to use force to impose one’s will is to become totally passive–to become a slave. This conception of anarchy makes it a rule to control our lives, and that is an oxymoron.

The attempt to make a moral principle of anarchy distorts its real significance. Anarchy describes a particular type of situation, one in which either authority does not exist or its power to control is negated. Such a situation guarantees nothing–not even the continued existence of that situation, but it does open up the possibility for each of us to start creating our lives for ourselves in terms of our own desires and passions rather than in terms of social roles and the demands of social order. Anarchy is not the goal of revolution; it is the situation which makes the only type of revolution that interests me possible –an uprising of individuals to create their lives for themselves and destroy what stands in their way. It is a situation free of any moral implications, presenting to each of us the amoral challenge to live our lives without constraints.

Since the anarchic situation is amoral, the idea of an anarchist morality is highly suspect. Morality is a system of principles defining what constitutes right and wrong behavior. It implies some absolute outside of individuals by which they are to define themselves, a commonality of all people that makes certain principles applicable to everyone.

I don’t wish to deal with the concept of the “commonality of all people” in this article: My present point is that whatever morality is based upon, it always stands outside of and above the living individual. Whether the basis or morality is god, patriotism, common humanity, production needs, natural law, “the Earth,” anarchy, or even “the individual” as a principle, it is always an abstract ideal that rules over US” Morality is a form of authority and will be undermined by an anarchic situation as much as any other authority if that situation is to last.

Morality and judgment go hand in hand. Criticism–even harsh, cruel criticism–is essential to honing our rebellious analysis and practice, but judgment needs to be utterly eradicated. Judgment categorizes people as guilty or not guilty–and guilt is one of the most powerful weapons of repression. When we judge and condemn ourselves or anyone else, we are suppressing rebellion–that is the purpose of guilt. (This does not mean that we “shouldn’t” hate, or wish to kill anyone–it would be absurd to create an “amoral” morality, but our hatred needs to be recognized as a personal passion and not defined in moral terms.) Radical critique grows from the real experiences, activities, passions and desires of individuals and aims at liberating rebelliousness. Judgment springs from principles and ideals that stand above us; it aims at enslaving us to those ideals. Where anarchic situations have arisen, judgment has often temporarily disappeared, freeing people of guilt– as in certain riots where people of all sorts looted together in a spirit of joy in spite of having been taught all of their lives to respect property. Morality requires guilt; freedom requires the elimination of guilt.

A dadaist once said, “Being governed by morals… has made it impossible for us to be anything other than passive toward the policeman; this is the source of our slavery.” Certainly, morality is a source of passivity. I have heard of several situations in which fairly large-scale anarchic situations started to develop and have experienced minor ones, but in each of these situations, the energy dissipated and most participants returned to the non-lives they’d lived before the uprisings. These events show that, in spite of the extent to which social control permeates all of our waking (and much of our sleeping) lives, we can break out. But the cops in our heads–the morality, guilt and fear–have to be dealt with. Every moral system, no matter what claims it makes to the contrary, places limits on the possibilities available to us, constraints upon our desires; and these limits are not based on our actual capabilities, but on abstract ideas that keep us from exploring the full extent of our capabilities. When anarchic situations have arisen in the past, the cops in peoples’ heads–the ingrained fear, morality and guilt–have frightened people, keeping them tame enough to retreat back into the safety of their cages, and the anarchic situation disappeared.

This is significant because anarchic situations don’t just pop out of nowhere–they spring from the activities of people frustrated with their lives. It is possible for each of us at any moment to create such a situation. Often this would be tactically foolish, but the possibility is there. Yet we all seem to wait patiently for anarchic situations to drop from the sky– and when they do explode forth, we can’t keep them going. Even those of us who have consciously rejected morality find ourselves hesitating, stopping to examine each action, fearing the cops even when there are no external cops around. Morality, guilt and fear of condemnation act as cops in our heads, destroying our spontaneity, our wildness, our ability to live our lives to the full.

The cops in our heads will continue to suppress our rebelliousness until we learn to take risks. I don’t mean that we have to be stupid–jail is not an anarchic or liberatory situation, but without risk, there is no adventure, no life. Self-motivated activity–activity that springs from our passions and desires, not from attempts to conform to certain principles and ideals or to blend in to any group (including “anarchists”) -is what can create a situation of anarchy, what can open up a world of possibilities limited only by our capabilities. To learn to freely express our passions–a skill earned only by doing it–is essential. When we feel disgust, anger, joy, desire, sadness, love, hatred, we need to express them. It isn’t easy. More often than not, I find myself falling into the appropriate social role in situations where I want to express something different. I’ll go into a store feeling disgust for the whole process of economic relationships, and yet politely thank the clerk for putting me through just that process. Were I doing this consciously, as a cover for shoplifting; it would be fun, using my wits to get what I want; but it is an ingrained social response–a cop in my head. I am improving; but I have a hell of a long way to go. Increasingly, I try to act on my whims, my spontaneous urges without caring about what others think of me. This is a self-motivated activity–the activity that springs from our passions and desires, from our suppressed imaginations, our unique creativity. Sure, following our subjectivity this way, living our lives for ourselves, can lead us to make mistakes, but never mistakes comparable to the mistake of accepting the zombie existence that obedience to authority, morality, rules or higher powers creates. Life without risks, without the possibility of mistakes, is no life at all. Only by taking the risk of defying all authority and living for ourselves will we ever live life to the full.

I want no constraints on my life; I want the opening of all possibilities so that I can create my life for myself–at every moment. This means breaking down all social roles and destroying all morality. When an anarchist or any other radical starts preaching their moral principles at me–whether non-coercion, deep ecology, communism, militantism or even ideologically-required “pleasure”–I hear a cop or a priest, and I have no desire to deal with people as cops or priests, except to defy them. I am struggling to create a situation in which I can live freely, being all that I desire to be, in a world of free individuals with whom I can relate in terms of our desires without constraints. I have enough cops in my head –as well as those out on the streets–to deal with without having to deal with the cops of “anarchist” or radical morality as well. Anarchy and morality are opposed to each other, and any effective opposition to authority will need to oppose morality and eradicate the cops in our heads.