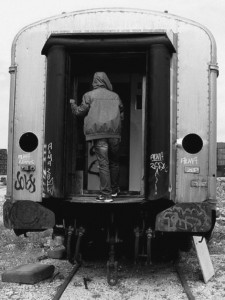 While in Val Susa the battle between the volunteers rushing to defend the Free Republic of the Maddalena was raging against the Praetorians sent to enforce the Republic of Slave Italy, a blaze in the night in Rome destroyed the new control room of Tiburtina station (a node of the Tav), blocking the national rail traffic. The suspicion that there may be a link between the protests in the valley and the metropolitan fire was immediate, as was immediate the outrage and denial of “NoTav People” through its public representatives; institutional assurances on probable natural causes were late in coming and not very convincing: it is a short circuit, less likely to be sabotage, or perhaps the side effect of a simple theft of copper.

But this suspicion has been creeping for hours and has not entirely disappeared – midway between hope and fear – a lot is being said. On the fear of the authorities as the possibilities of action. Those who are terrorised and those who are enthusiastic: the possibility that the struggle against the Tav could come out of this far away valley in Piedmont to explode throughout the country. That it finally gets rid of the unbearable citizenist litany to take up the weapon of sabotage. A thought at the same time terrible and wonderful. And not only is it possible, it is also easy. No video surveillance system, no increased patrols will ever be able to guarantee the effectiveness of a rail network which is spread over tens of thousands of miles. There is no need to take a train and get on the wagon of politics to try to stop the High Speed. There is no need to be generous, humble and silent labourers for the small differently republican strategists.
The fire in Rome burned for fifteen hours before being extinguished. But the ashes left behind rebel embers continue to sprout. Tav sites have burned elsewhere in Italy, as did the lorries of a company involved in the work of Chiomonte. And now firemen are arriving from everywhere with their water pumps, those that spit foam and those that bring out press releases. It is especially the latter – the spokespersons, representatives, leaders – who are working the most to throw water on the fire. The day before yesterday, they disapproved of the fire in Florence, yesterday they were horrified by that of Rome, now they condemn that of Susa. But what, within the noble and generous “NoTav People” were not all the minds, the methods, all the behaviour supposed to live together in respect for differences? Were not all welcome, those who make prayers to heaven ajust as those who throw curses on earth?
Well no. It’s all rhetoric, lies, as demonstrated by the spitting of condemnation on the flames of the sabotage, too singular to deserve the applause of the masses. The ovations addressed to other hunter-alpine soldiers who guarded the Chiomonte site. The only thing that seems welcome in Val Susa is the foul cohabitation – product of collusion between those who advocate that another politic is possible, another Republic is possible, another State is possible, and those who would like the end of all politics all Republics, all States. A dialectical game carried out by an alternation of tacit agreements and patient sighs, of closed eyes and plugged noses, linguistic acrobatics and timely omissions, in view of settling the final account. Lies and hypocrisy, with in the precociously dried up heart the hope of having become so skilled that one can even manage to do business with bankers.
Suspicions about the fire in Rome, like the certainties concerning those in the regions of Modena, Florence and Susa, are there to warn that this putrid political friendship that guarantees concorde where there can only be conflict, might well cease from one moment to the next.
[trad. sysiphusangrynew]