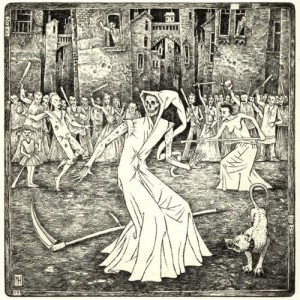 “Turn off the main switch in this dump. Here the beautiful becomes ugly, the choice becomes a habit and the meaningless important. Prison dirties creases and swallows pieces of dreams, desires, thoughts and feelings. Its most permanent residents, the majority of the prisoners are now a part of the appliances of the prisons. Bars, yard, cameras,locks, prisoners mix all together and re-enact the world of captivity. Nothing is worthy of captivity. Nothing is worthy in here. Come let’s go and don’t look back….Only fire will cleanse this place…..”


Prison and its numbered residents. Prison and the degradation of its prisoners. Prison and its myths….Behind the iron door of prison which closes, there is a captive world which has nothing to envy of the ‘free’ world. Away from the illusions of an allaged value code of the outlaws, a make believe solidarity between the prisoners and supposed self-organizated struggles and revolts, the society of the prisoners is the mirror of the law abiding society.

Conservatism, hypocrisy, racism, misery, compromise and snitching, this is the civilization shadows next to leftover smack and pills. Human rodents, customers of the prisons, decadent misprints of the bosses of this world, who have been exiled to prison as excessive weight of the earth. Most prisoners are guards of themselves.

They have leant to double-lock them-selves in pills, smack, slavery, habits, the passive counting of days for the miserable repetition of their subjugated self. Prisoners justify their role as the waste of an even more sordid society.

We do not intend to become a part of this community of human imitations and shadows. We keep ourselves away from the annoying noise of the mob and we separate those few minorities of the prisoners who do not forget the meaning of freedom. We meet with those who did not kneel in captivity, who did not exchange their dignity with powders. And pills, who did not lower the eyes in front of the authorities and the laws, who did not let the prison be built inside them.

As for the rest we will not fail into the trap of humanism and pity. We do not appreciate passive emotions. Whoever surrounds themselves with the motif of resignation or accept the victimized figure of the “con” might win over the sensitivity of the philanthropists and sociologists but from us receives only a deep contempt. We are hostage anarchist guerrillas and not just prisoners. To say things as they are is not a result of some informal elitism or discrimination; simply in this way wa attack the attempt of the state to hide the existence of the anarchist constant revolt and its hostages.

As anarchist hostages of democracy we never separated ourselves from our values and ideals. We remain enemies of justice and its courts, promoting the self-organization of our action and self—redress far from any kind of mediators.

The undisputed fact that we are against prisons, does not mean that we are in solidarity with all prisoners.

A short while ago in Thebes prisons the service purposely transferred to the wing where our comrade Olga Economidou was, a prisoner which her attitude and her “penal” actions could not have been tolerated by the morals, character and dignity of Olga. As we have mentioned there are prisoners who are as sordid as the society of law abiding citizens.

Our comrade acted consciously resulting in finding herself before the prosecutor of the prison, accused of “beating an inmate” and was imposed with a disciplinary transfer. Now she is in the isolation unit of the female prison of Diavata., where she was transferred with a special transfer and where she refused to be subjugated to the humiliating bodu search.

The precepts of the officer in charge to conform to the body search, invoking the example of another “anarchist” prisoners who have compromised with this correctional measure, fe3ll into the void…..We are not all the same…neither do we do the same prison time.

Anyway, everyone is not characterized by the political label they have put on them or has adopted on their own, but CONSISTENCY to them.

The prosecutor of Diavata prisons because of her refusal to be strip searched imposed on Olga 10 days confinement to an isolation cell. We, her comrades in the Conspiracy Cells of Fire, are next to her, to her choices which are our choices as well and send her our most warm embrace with our unrepentant commitment….we remain for ever in the battle….

P.S. We also want to express our solidarity to anarchist Rami Syrianos who remaining consistent, he has humiliation of the strip search, which is essentially the humiliation of dignity, and is for a month now in an isolation regime in Nigrita prisons. Rami has already begun prison food abstention…..

ANARCHISTS OF ACTION ALWAYS IN THE BATTLE FOR THE SPREAD OF THE INFORMAL ANARCHIST FEDERATION (FAI/FRI) AND THE BLACK INTERNATIONAL…..

Cell of Imprisoned Members of the    C.C.F. – FAI/FRI and Anarchist Revolutionary Th. Mavropoulos.