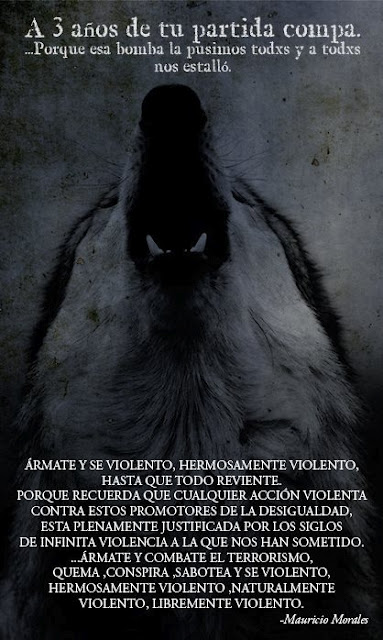 From the Cell of the imprisoned members of CCF/FAI/IRF

Translation from Italian (via the Spanish version)

It is not easy to write about a comrade you never met. Since the day that the damned news came from distant Chile, we’ve been embittered. A comrade lost his life in the explosion of a bomb that he was carrying in order to place it in the academy of the gendarmerie.

His name was Mauricio Morales.

Since that day, this name has been mentioned so many times in our communiqués, in our texts. This name came with us in our clandestine itineraries, when we placed our bombs, when our rucksacks were dangerously heavy, full of explosives, when weapons were our company.

Mauricio Morales is not simply a name. He is an unknown friend, a comrade and a brother. And even if we never met him, we followed his same path, shared the same wild nights and loved the deafening explosions that continue to shout: “we are still alive in your world!”

There will always be strong moments that unite parallel trajectories and stories. How many times, through our imagination, we have welcomed our “ancestors” at our table: Emile Henry, Ravachol, Severino Di Giovanni, Renzo Novatore  and brothers like Mauri, all of them went away “too early”. They are the guests of our tempestuous debates, raging desires, worries, with red eyes and sweaty hands because of the tension, while we set yet another explosive device or clean up our weapons…

Right there, where we plan new projects of subversion and attack, the memory and the present become one thing. It might be that comrades like Mauri are not close, but they are present.

Because it is people who have the courage Mauri had who make it possible for the stars to shine. For this reason we carry them in our hearts. We anarchists of action are made of a strange material, and quite often the majority of people don’t understand our madness. Quite often many people see Mauri as a young man who died in vain. They are all those tired minds that have surrendered to the cult of defeat, which preaches that “this world will never change and any struggle is useless”.

The only certainty is that life cannot be lived with supplications and prayers. It is necessary that our hands grab fire, our eyes stare at the chaos and our hearts throb at the rhythm of anarchist destruction and wild existence.

Mauri knew this, and he lived to the extreme as an anarchist of action, as a comrade and brother. For this reason his death bears a special burden, the burden of loss. But Mauri’s absence is not a reason for crying. On the contrary, it becomes a flame alive in the fuse of a molotov in Santiago, a detonator around the cables of a bomb in Athens, the bullet in the barrel aiming at the enemy, the file to evade from the cells that keep us prisoners, the smiles on the lips of any known and unknown anarchist of action. When we feel pain we cry, when we feel joy we smile, because we know that we are at war and losses are part of our life, but never will they empty our hearts.

We carry these absences with us in our clandestine lives, in prison, in the silence, in our shouts, and we will keep the memory of our comrades intact.

Of course we need neither heroes nor saints.

Mauricio is one of us. Even the dozens of actions carried out in his name did not take his name away, but rather they were carried out along with him. For he’s always with us and we share his same mad dream, that of constant insurrection against the social machinery.

Mauri’s smile and death gave new impulse to the uninterrupted path to anarchy.

For the Conspiracy of the Cells of Fire, Mauricio Morales is an incitement to increase and strengthen the strategy of anarchist international solidarity.

For us Mauri was an incitement to make contact with comrades in Chile, Bolivia, Mexico, Peru, Argentina and Uruguay for the first time…

Any action of attack, from Chile to Greece, from Italy to Mexico, is a step forward towards the bet of the Black International of the anarchists of Praxis. At the same time the FAI (Informal Anarchist Federation) and the FRI (International Revolutionary Front) are spreading in a chaotic and unpredictable way, creating new cells all over the world, and these cells are attacking the civilization of power with a knife between their teeth.

New comrades are arming themselves and their bombs full of dreams, desires, worries and thoughts are following the same roads that Mauri took, in an endless battle…

As we wrote in the communiqué claiming the explosive device at the Chilean consulate, soon after Mauri’s death:

“Any attack (…) is our mirror masked as a bomb, an explosive device that liberate us. You can’t hang it to the wall or on your bed, but you can look at it and ask us: ‘Is there anything more liberating than attack?’ As happens with any mirror, this one doesn’t allow self-critique. We are convinced that through self-critique many, even including ourselves, will become better. For this is the question, to become better…. For in this way we feel and understand our losses…

Cells of the imprisoned members of the CCF/FAI/FRI